I signed up for a class over at Big Picture Scrapbooking called Kidding Around. I'm really looking forward to it. It's designed for kids and their moms. Each week, you get a fun summer activity, a writing assignment, and a photo assignment. It starts on Thursday, but there was a preview assignment to make the Paper Pals that will accompany the boys on their summer fun. This is what they made. They picked the papers for the clothes, and I cut out the clothes and the people (I put them on cardboard, so it was easier for me to cut them). The boys colored and drew in the faces. I have no idea why Brendan's is green. he said he wanted it to be--lol! 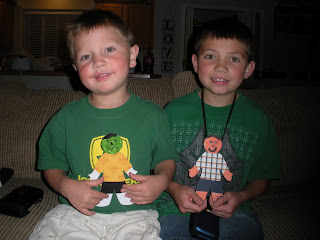 To make it even more fun for them, I bought them an inexpensive digital camera at Walmart. That way they can take pictures themselves, without me worrying about them using my camera. They had a ball tonight trying it out. 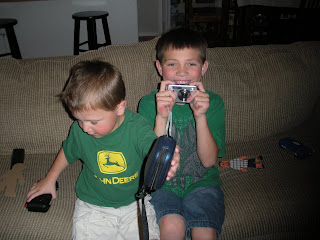 Just to prove I wasn't kidding about needing to clean my scrap room to find space to play, here's a few pictures I snapped earlier today. I don't know why I feel the need embarrass myself. I have a 6 foot and a 4 foot table set up in my room and there was zero space on either of them--yikes. 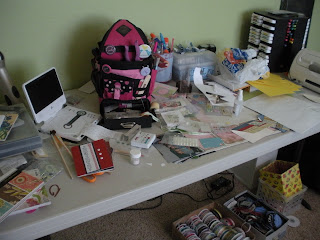 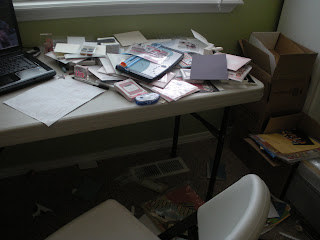 I'd like to say it looks better now, but I only managed to clear off part of the 4 foot one. I'll blame it on my brother's girlfriend, Kaitlin. She loaned me the first half of Glee Season 1. Love that show! I got caught up in watching, and didn't get much accomplished. I guess you can say I'm now officially a Gleek :) 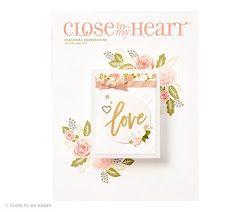